There is a lot written about how to Manifestation and probably as many different courses to teach you how to.  However they never seem to quite tell you how to manifest what you want.  Below is my recent experiences and how I manifest what I want, that I would like to share with you.

I have just come back from holiday / travelling in Laos and Cambodia, two countries in South East Asia. Laos appealed to me because the landscape, especially in Northern Laos, has virgin rainforest that are still unexplored by humans, that cover mountains and are dotted with villages of native Lao people. This was the only part of the trip that I had planned and had mapped out the root to the town I wanted to go to, to start my trekking adventure.

The morning that I started my journey in Laos I said to the Universe / God / Source (use whatever you believe in) “I would like to meet some people to go trekking with, so that we can support each other, have a laugh and keep the cost down”. In my head I also thought it be great to get to know them and feel safe with them. I felt in my body what this would feel like and I smiled my gratitude at the Universe. Than I just got on with getting a Tuk Tuk (a motorbike with a seat attached to it, that is on wheels) to the bus station.

When I got to the bus station I was not allowed to buy a ticket, I did not understand why this was. So I went to the bus and saw that it looked quite full and their where people standing outside the bus demanding that they had already brought tickets and should be allowed on the bus. To cut a long story short I did not get on the bus and had to wait 4 or 5 hours for the next bus. I was not pleased about the wait because the journey into the mountains would take at least 4 hours and I had another 2 hour journey on top of this to get to Maung Sing where I wanted to trek from. So it was now doubtful that I would make this journey in one day.

I could go back to the town I had come from and wait there but this would of been expensive, so I decided to wait in the open air bus station. I meditated for a bit and lay down for a bit. After a couple of hours a western lady smiled at me and a little while later came over to me with her friend. We were catching the same bus and still had two to three hours to wait. So I suggested getting something to eat and maybe going back to town. We found something to eat close by. It ended up that we had similar travel plans and after getting to know each other they agreed to go trekking with me. I was really pleased and felt grateful that my manifestation was coming true.

I had a great time in Northern Laos and the little things that I asked for all happened. 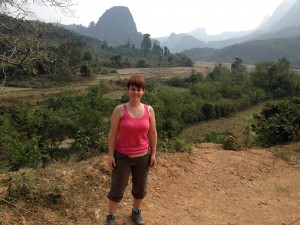 When I arrived in Cambodia I was sick and I spent the next 36 hours in the hotel. The next day I was no longer being sick but I did feel weak. So I hired a Tuk Tuk driver and went to see the temples of Angkor Wat. In Cambodia I felt uneasy, Im not sure why. Yes I had been unwell but it was something else. I thought OK I will accept this feeling and see what happens.

What happened was that even when I got to the beach I still felt uneasy. My mind jumped at the chance of having a reason for this- It was a much longer journey than expected; The bungalow that I had booked on the beach was right next to the hotels bar and through the thin wooded slats I would hear people all the time. I was promised that the music stopped at 11pm. It did, however I was woken at 1.30am by a group of young women loudly taking to each other. I told myself this was good for my meditation practise and tried to go back to sleep. Which I only managed an hour later when the girls had quieten down.

The next day I had managed to book a boat to an island that would be the paradise that I was hoping for. On the Island I got invited to go fishing and as I believe in going with what presents I said yes, even though I was unsure what the journey, with a bunch of people I did not know on their boat, would be like. What happen as soon as the boat started to sail was that the owner of the boat and his girl freind started to have an argument – some paradise!

The following day I was more aware that my mind was not peaceful and this was the cause of the uneasiness I felt. I knew that I needed to clear my mind and allow myself to feel the peace that is always present in all of us. In meditation I could see how my perceptions of things as being uneasy just added to be experiencing more of this. Once I took responsibility for my perceptions co-creating my reality my time in Cambodia was a lot more peaceful and fun.

I have shared this story with you because I hope that it demonstrates how I, you and everyone, is constantly manifesting / co-creating their reality – the ‘good’ things and the ‘bad’ things. This is the secret of manifestation – you are doing it all the time.

Awareness is the key to manifesting / co-creating

the life you love to live.