I learned that my values have thoughts and beliefs attached to them and therefore can mean something different to me than it does to someone else.  An example of this is that I struggled with the women being late for the massage course.  I believe that turning up on time shows that you respect the person that you are going to meet and that you see value and benefit in meeting that person.  However, how the women showed respect was that when they did turn up they were very present and willing to learn all they could.  They done this by making sure that all the things that needed to be done in their farms were done before they came; this also meant that they could often stay longer than arranged to continue to learn if that what was needed or if I was willing to teach more; which I always was.

Most of the women and children instinctively trusted me and opened their hearts to me, I could feel their love for me even though we had never met and they did not know me.  I felt incredibly welcome.  Strangers would say hello to me on the street, look me straight in the eye and shake my hand.  Some of the women and children were, I think, more shy and watched me first before they opened up to me.

We had a party to say goodbye to some volunteers that had been at KATCH for a long time to which most of the village was invited too.  The women on the massage course wanted to dance with me and when they did they looked straight into my eyes constantly.  One women held my hands as we danced and did not stop looking at me straight in the eye.  After about 30 seconds I wanted to look away, then after a minute I wanted to walk away.  At this point I asked myself what I was afraid of?  I had no answer so I decided that I would fully open and let her see whatever she wanted to see.  I am not sure if she wanted to see anything, it just felt like this was an opportunity to experience being fully open to someone in an innocent context.  It was an intense experience and after about four minutes I said to the woman “It feels like we are married?” and broke my contact with her.

All the people I met without exception believed in God and Christianity.  I was brought up a Catholic and my parents are Irish so it was pretty full on, in that I went to Catholic School, had church everyday and even went to Church groups at the weekend.  So at times at first, I could feel myself being triggered by the doctrine of Christianity being ‘thrown’ at me.  However, I realised every time that I was just being triggered and there was something else deeper present if I could be present to it.  What I started to see was that everything started and finished with a prayer.  I was fairly quick to tell that that I believe in God and I am a Buddhist.  To my surprise on the second day of the course the women asked me to say a Buddhist prayer.  I was so touched by how open and respectful they were and that they seemed to appreciate the prayer.  What I feel is that they have the fundamental values of what I was taught being a Christian means.  They do support, love and respect each other.  Now I am home I have noticed that I have started to reuse the word God more in my conversations with others and am more comfortable with the meaning of the word God.

There were times on the course when the women would get very loud and to me seemed excited.  I would find myself thinking I wish they would pay more attention to what they are doing and talk about the massage.  After a few days I actually said to the women, as I had a bigger group than normal, “Please can you concentrate on the massage and if you need to talk please talk about the massage”.  They just continued to carry on talking and I was left not knowing whether they understood me or not.  After quite awhile I asked one of the women what was happening and she replied that they have a question for me.  “OK? Why don’t they just ask me?”.  The response I got to this was a confused look.  After some more time had passed the question was asked, I answered it and then there was some more noise than silence.  This happened once more before I realised that what was happening was that the women were discussing how to ask the question and I suppose giving their own answers to the question, before actually asking me it.  It was a long and noisy process.

From this I learned that when something was happening that I did not understand I could just ask one of the women that spoke English.  Furthermore there were some cultural differences that I needed to ask about outside of the course to understand what was happening.  However, cultural differences like being on time was something that I could not get an answer to and I needed to figure it out by asking other questions like what did you do before coming to class? 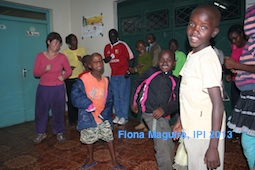 My normal default pattern when I go to another country for the first time is to learn by observation what are the cultural guidelines.  I aim to stay polite and open minded.  In the past I have got irritated by people asking the locals questions from a Western Mindset that are often rude and disrespectful of that person’s culture and beliefs.  After a period of time and if I keep seeing something that I cannot make sense of I will try to pick an appropriate moment to ask a question.  What I learnt from teaching in another culture is that I need to take responsibility for my own needs so that I can teach my students to the best of my ability.  This meant that I needed to ask questions to find out what resources are available, for example.

If you would like to make a Donation to me so that I can go back and do further work with the project.  Click on the button below:

Any amount of donation is very much appreciated.  I have set up a bank account and a Paypal account that is only for collecting money for this purpose.  Making everything transparent and I am happy to share the details with people who make donations, and of course everything is confidential.

A Free Gift to you to say Thank You

When you make a donation as a way of saying thank you, you will be diverted to a page where you will get to choose a free gift, which people would normally buy or receive when they are doing coaching or training with me in my business Real Energy, Empower Yourself www.RealEnergy4All.com  If people donate over 50 I will send them a copy of my book “The Key to Awareness” as a special thank you.

What I learned about Values, Love and more during working for IPI

2 thoughts on “What I learned about Values, Love and more during working for IPI”